In her seminal 1989 study, Las románticas : women writers and subjectivity in Spain, 1835-1850, Susan Kirkpatrick traces the trajectory of the likes of Carolina Coronado, Gertrudis Gómez Avellaneda or Fernán Caballero – the pseudonym of Cecilia Böhl de Faber – as they struggled to reconcile their literary ambitions with dominant notions of femininity. Bar a couple of prominent antecedents, like the formidable Santa Teresa de Jesús or Sor Juana Inés de la Cruz, these nineteenth-century women were confronted with what appeared to be an almost complete lack of female presence in Spanish literary history. Faced with this vacuum, they had to look beyond their borders to the likes of Madame de Stäel, and across the centuries to legendary Antiquity poetess Sappho. Little did they know of the number of women who enthusiastically participated in the flourishing cultural scene of sixteenth and seventeenth century Spain, a period that witnessed the development of the printing press, just as Carolina Coronado and her contemporaries would pick up their pens almost two centuries later, after repeated improvements to Gutenberg’s original invention ushered in the golden era of periodicals and the emergence of mass media.

It is therefore perhaps rather fitting that the Biblitoteca Nacional in Madrid should host its exhibition on these forgotten women in the Sala de las Musas, the space dedicated to temporary curations and, like Sappho, another reference to Classical culture. Tucked away in the museum adjacent to the library, a legend at the entrance duly informs interested visitors as well as more unwilling troupes of school children that La Sala de la Musas is an allusion to the ‘Institution of Muses’ or ‘Musaeum’, a temple for the worship of these minor deities – the most famous example the now vanished Musaeum of Alexandria and its legendary library. Hence the origin of the word ‘museum’, the guide revealed to a group of ESO students as I entered this tiny sanctuary (‘is this going to be in the exam?’ I heard one whisper to the other). The free exhibition El despertar de la escritura femenina en lengua castellana, which runs from the 30th January to 21st April and that includes International Woman’s Day on the 8th March, offers a brief yet fascinating look into those women who enthusiastically participated in cultural life during a transition period that witnessed the rise of the printing press and the possibilities for dissemination it promised. This period constitutes another key threshold, containing as it does the rise of romance languages, despite Latin retaining a scholarly precedence. 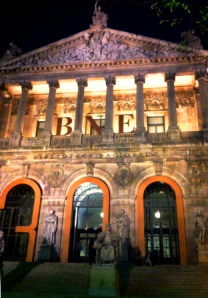 The Biblioteca Nacional by night.

That this awakening of female authorship unfolded in the increasingly standardized Castilian language, as the title of the exhibition highlights, bears witness to this transient period between Latin and its rising vernacular. It also reveals a hitherto unknown involvement of women – at least to those outside specialist fields – in the cultural production of their country. I doubt that the school children, having now formed an impromptu ensemble of scratching biros as they anxiously scribbled down notes, would be able to name many woman writers from the otherwise dutifully drilled Siglo de Oro. Lope de Vega would undoubtedly come to mind, and it is partly thanks to this prolific author that many now forgotten females have been recovered from historical oblivion. His Laurel de Apolo (1630), an invaluable source that lists the main poets of his day, also mentions countless women like Cristobalina Fernández de Alarcón (1576-1646), Juliana Morell (1594 –1653), Bernarda de Ferreira (1596-1644), María de Zayas (1590–1661) and of course Santa Teresa de Jesús (1515-1582), who Lope de Vega describes as ‘de ver que una mujer pudiese tanto/ que haya dado en la iglesia militante/ descalza una carrera de gigante.‘ Without forgetting Sor Marcela de San Félix (1605-1687), the illegitimate daughter of Lope de Vega himself and the “comedienne” Micaela de Luján. Sor Marcela, as her title reveals, took vows, but was also a poet, dramatist and even dabbled in acting, a career trajectory that to a modern audience is startlingly reminiscent of the plot of Sister Act.

It is worth remembering though that to enter a religious order was more akin to a career path than an exceptional conviction during a time when religion was so closely interwoven into the fabric of society, and the choices of women were more limited than today. For women who did not want to enter marriage, lacked independent means or wanted an education, becoming a nun was a socially accepted route to schooling. A section of the exhibition is thus dedicated to women like Santa Teresa de Jesús, Sor Ana de Jesús (1545-?, 1621), Sor Ana de San Bartolomé (1549-1626), Sor María de la Antigua (1566-1617) or Sor Hipólita de Jesús Rocaberti (1549-1624), and on the other side of the Atlantic the indefatigable Sor Juana Inés de la Cruz (1651-1695). Not only did these women write works that displayed their intellectual prowess, but they also played an important role as conductors and disseminators of (what have since become) classics of Spanish mysticism by such emblematic figures as San Juan de la Cruz and Fray Luis de León.

However, the convent walls were not always a safeguard from potential censorship and persecution. Sor Juana Inés de la Cruz was forced by a suspicious Inquisition to part from her many scientific instruments, her literary collection, and to become estranged even from her ideas, compelled to declare herself ‘la peor de todas’. Equally Santa Teresa de Jesús had all her books confiscated, who undeterred is said to have exclaimed ‘¡Ahora Señor, tú serás mi libro!‘. Others like Sor Ana de Bartolomé or Sor Ana de Jesús had to flee and lived out their days in Belgium.

The figure of the female mystic, who has later occasionally fallen into the trap of becoming romanticized or reduced to a mere national archetype, is not the only type of woman writer here presented. A section is dedicated to a number of women whose high social extraction coupled with a degree of freedom afforded by personal finances, position or other varying individual circumstances, enabled them to indulge in their literary ambitions. A central figure in this secular Parnassus is the incredibly successful yet enigmatic María de Zayas (1590–1661), whose works went through numerous editions and were translated into several languages before her literary star gradually faded into obscurity in the nineteenth-century, her novellas considered now vulgar. Despite her prominence during her lifetime, very little is known about the author herself, and her figure remains shrouded in mystery.

Similarly, the polyglot Luisa Sigea (1522-1560), who amongst other languages mastered Latin, Old Greek, Hebrew and Portuguese in addition to Spanish. Her best known work, Sintra, was penned in Latin, a testimony to her ability to effortlessly navigate between Classical culture and the vernacular. Sigea, however, was the victim of the printing technology that had placed her on the literary map. A Frenchman by the name of Nicolas Chorier took advantage of her fame by signing her name to an erotic novel he authored titled La Academia de las Damas. Oliva Sabucco (1562-?), on the other hand, had to defend the authorship of the seminal Nueva filosofía de la naturaleza del hombre, no conocida ni alcanzada de los grandes filósofos antiguos, published in 1587 and which exhibited an impressive knowledge of not only the prevailing philosophical debates of the time, but also the main medical and scientific developments. Hugely praised, her own father attempted to publish an edition in Portugal under his name.

Inspired by the talent, fearlessness and intellect of these pioneers, many of them hitherto unknown to me, I left the Sala de Musas and walked to the adjacent main library. As I traversed its corridors on the way to the main reading room, admiring the handsome neoclassical building, my eyes would routinely scan the portraits that decorate the galleries. Depicted on them are the recipients of the prestigious Cervantes prize, awarded since 1976 to authors deemed to have made a significant contribution to the Spanish language. I have so far spotted two women, although I have heard there is a third one, out of 38 writers in total. It is my hope that one day this sanctuary to knowledge houses more muses, that they are not rescued from the archives, dusted off and brought out only for special occasions in Sala de Musas. But that is a much bigger project, in which the national library in Madrid is but a mere piece.

Rocío Rødtjer is a full-time library lurker and a second year PhD student at King’s College London. Her thesis attempts to redefine conventional notions of modernity to accommodate the plethora of female bylines that started to populate the literary landscape of fin de siècle Spain, particularly in the press – an emblematic vehicle of this budding modernity.